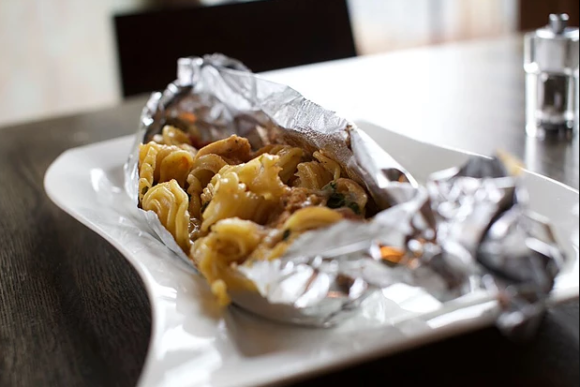 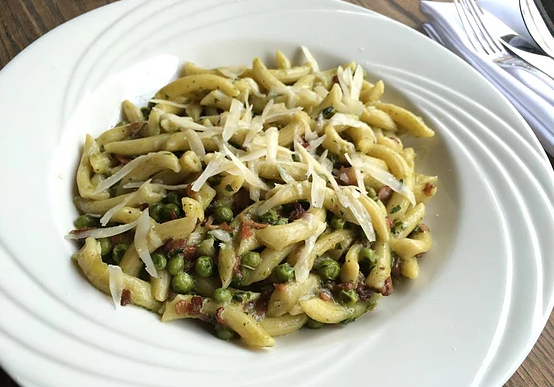 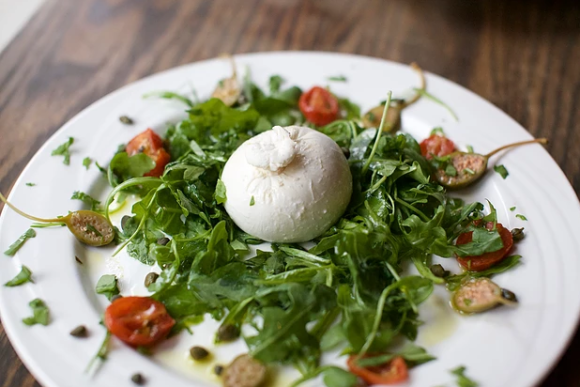 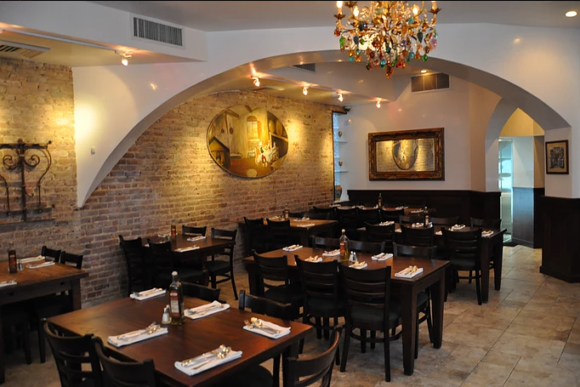 Sitting down at one of the restaurant’s farmhouse tables for a staff meal of dry mozzarella grilled with bacon, roasted pepper and olives, fresh tubasini with lobster, and his mother’s recipe for wheat cake one weekday afternoon, he describes his childhood in Salerno (just south of Naples on the Gulf); “See, my father who was a chef, used to come home every day at one o’clock and cook because we had eleven kids and then after he finished eating he used to put the spoon and the knife and fork on the table like this and he’d say. ‘Everything was good today; what we gonna eat tomorrow?’ He used to grab my mother by the hand at 2:00 pm and go in the bedroom — this is every day and come out again six o’clock in the afternoon … My house was a feast every day.” Roberto uses all local products, makes his own fresh pasta, and uses nothing from a can -that includes tomatoes, which he purees by hand.

Twelve years ago, when Roberto Restaurant first appeared in Belmont—the Bronx’s Little Italy—there weren’t as many good dining spots as there are today. Back then, proto-foodies trekked to Arthur Avenue for the purpose of purchasing fresh raw bunny.
Pennsylvania, and to visit a wine store that offered two dozen Brunellos. But they dined as an afterthought. It wasn’t that Roberto was so different in focus from the other restaurants there. Like the others, it still served a southern Italian menu. Roberto’s, though, originated in the recent past rather than more than a century ago. In addition to furnishing amazing food, the place provided a fascinating glimpse of what Italian-American cuisine might have been had the full range of raw materials been readily available to immigrants 100 years ago.
The portion size at Roberto’s was opulent, too, so that signatures like roast rabbit with juice-soaked potatoes, pasta and seasonal veggies baked in cartoccio, and sautéed broccoli rabe tossed with beans and sausages would easily feed a table of ravenous diners who had only ordered one dish per person. A couple of rave reviews (including the Voice’s), and customers were soon streaming up to the Bronx—many for the first time in their lives. The chef was Roberto Paciullo, native of Salerno, a port city south of Naples.Flush with the success of Roberto, Paciullo opened Zero Otto Nove (“089”) on Arthur Avenue in 2008, named after Salerno’s telephone area code. Riding a wave of Naples-style pizza fetishism, the place focused on pies, but a full southern Italian bill of fare was also available, delivered in belly-busting portions. More recently, a branch has opened in the Flatiron district which combines the menu’s of Roberto’s, and the original Zero Otto Nove.

Per Lei, in Italian means "for her", this venue is the latest baby of Mr.Enrico Proietti, one of the most successful restaurateur in New York. 1347 East 71st Street, New York, NY 10021, United States