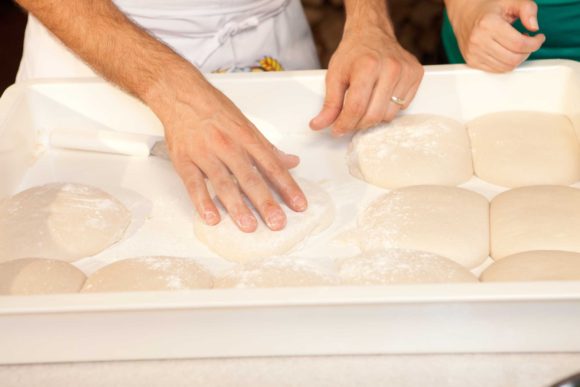 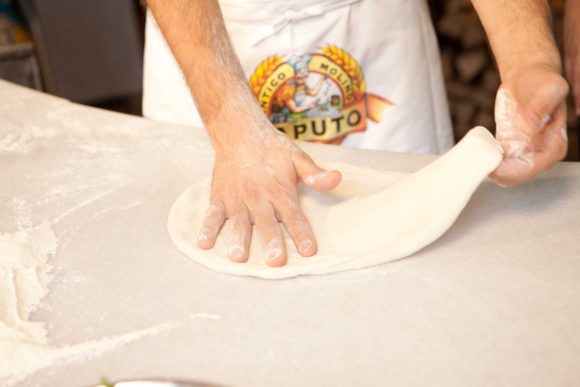 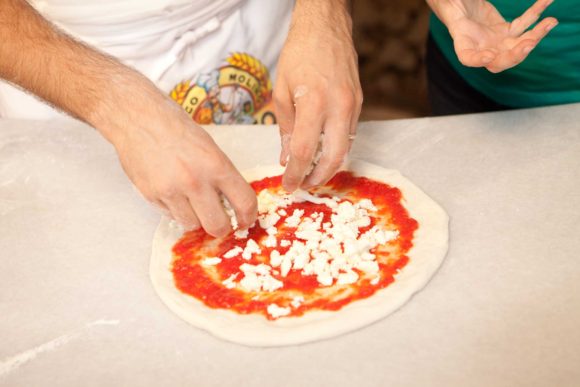 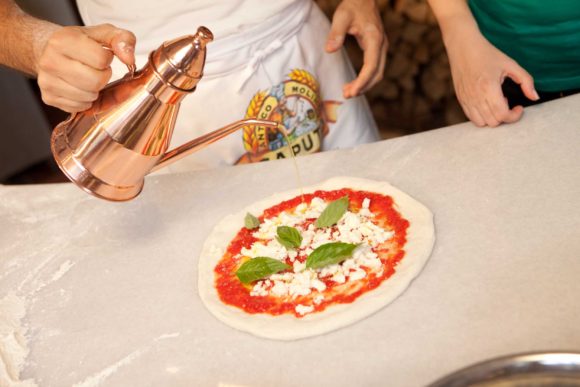 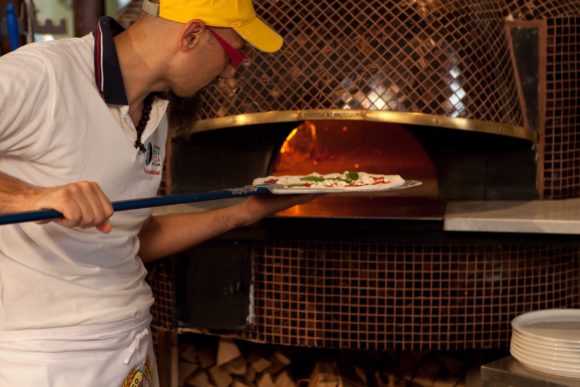 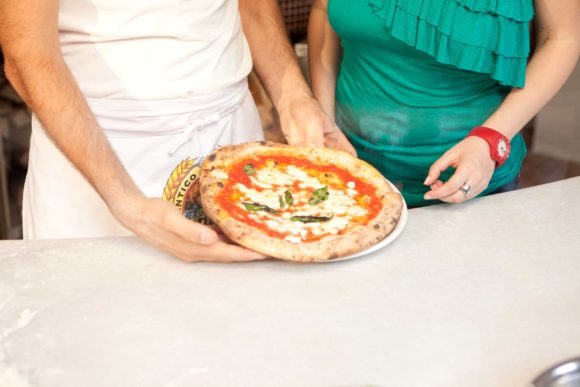 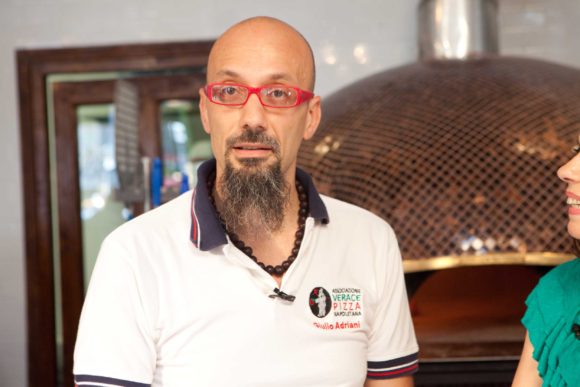 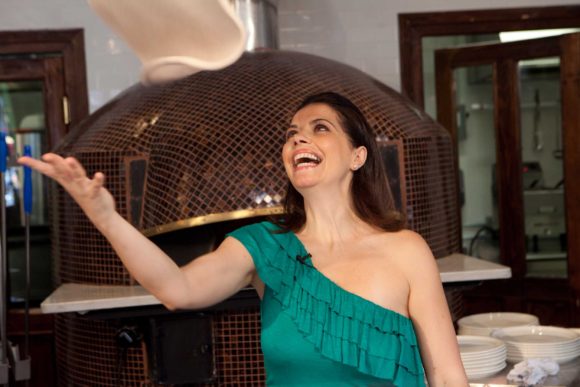 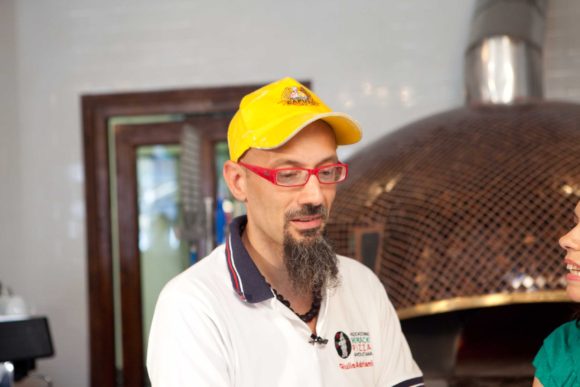 With 30 years of cooking experience, beginning in his grandmother’s kitchen, Naples-native Giulio Adriani is redefining Neapolitan pizza in America. Giulio grew up in Rome, and learned the intricacies of pizza making from his Neapolitan grandmother, “Nonna Maria.” Later, he traveled to Naples to learn from the best, including  Italy’s master pizzaiolos, Gaetano Fazio and Antonio Starita. His career has long focused on developing the perfect crust.  Also a stickler for authenticity, he insists that his mozzarella be handmade at each of his restaurants.

Certified as an authentic Neapolitan Pizza Master by the Associazione Verace Pizza Napoletana (AVPN) and the Associazione Pizzaiuoli Napoletani (APN), Giulio opened three restaurants in Italy, including the famous “Alla Corte Dei Borboni,” located in Ostia near Rome, and became the head instructor at AVPN in 2008.

When not wielding a pizza peel, Giulio is an avid surfer who catches waves around the world. He also enjoys playing golf and dancing as he did professionally in his early 20’s. Balancing his passions with family and his career, Giulio is also known by all that know him for his ‘we only live once’ mantra.

In 2011, Giulio started “Forcella” in Manhattan and Brooklyn. As chef and owner, he galvanized the media’s attention with his signature pizza, the Montanara, an authentic Neapolitan pie where the dough is flash-fried, toppings are added, and the pizza is finished off in a 1,000F-degree wood-burning oven.  The frying inflates the crust, giving it a pillowy texture while adding an extra layer of rich flavor.  The brief baking evaporates any residual oil, leaving the crust light and fragrant. New York was immediately smitten with the Montanara – Time Out New York bestowed it with their 2012 Reader’s Choice Award for Best Pizza.

Giulio launched his first U.S. restaurant, “Olio Pizza e Più,” in the West Village during the summer of 2010.  It was here that he gave New Yorkers their first taste of his Neapolitan pies, especially his classic Margherita.  The spectacular, yet unadorned pizza, where quality and flavor have no place to hide, won him the coveted Gold Medal at the 2010 World Pizza Championship in Salsomaggiore, Italy. He also won the International Pizza World Championship in Napoli (2009), the Pizza World Cup in Lecce (2008) and the famous World’s Best Pizza – America’s Plate in New York (2010).

In 2013, Giulio became the first pizzamaker to open an authentic Neapolitan Kosher pizzeria, “Pizza da Solo”, located inside the Sony Building Atrium in the heart of Midtown. His opening revolutionized the Kosher pizza world, setting a new standard of quality, while attracting media and food lovers, especially of the Jewish Community, that line up every day to taste one of his delicacies.

In 2014, Giulio joined forces with Max Crespo and his innovative food truck company, “Neapolitan Express,” to help with the expansion of the concept. Neapolitan Express opened the first pizzeria on Wall Street in 2015 and its fleet now consists of 25 food trucks. Neapolitan Express is an eco-friendly Neapolitan Pizza Concept that uses alternative fuel to power the trucks and innovative electric ovens that reproduce exactly the characteristics of the classic wood fired pizza ovens generating zero carbon emissions.

In 2015, Giulio left Forcella and opened the first and only NYC Pizza Speakeasy, “SRO,” a hidden gem located inside the restaurant GIA. SRO immediately had great reviews and demonstrated, again, the creative mind of the chef/entrepreneur.

In June of 2016, Giulio became a Guinness World Records holder for the World’s Longest Pizza, previously held by the Italians. Giulio collaborated with other pizzaiolos in Fontana, California to create a pizza that stretched a record-breaking 1.3 miles.

Currently, Giulio resides in Atlanta, GA where he is a founder & owner of a newly established restaurant concept, “THE LOCAL PIZZAiOLO.” Unlike any restaurant he has had before, THE LOCAL PIZZAIOLO is a fast-casual Neo-Neapolitan pizzeria, which uses globally-sourced ingredients to create an authentically inspired Neapolitan pizza that 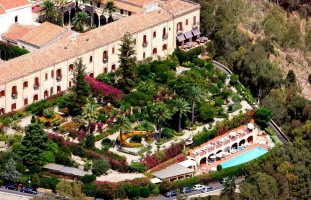